All my life I have strived to be somewhat of a hero like Ernest Hemingway or Mark Twain. They were fishing heroes and incredible writers, and one wrote right alongside my triple great grandfather during their stint together fighting in the Civil War. Both Hemingway and Twain managed to be a part of, or directly engaged, in some of the most fascinating wars of our time, from driving ambulances in World War I to scouting for the Confederacy in Missouri. The first, Mr. Ernest Hemingway, was a man’s man, an avid outdoorsman who prided himself on the sizes of his trophy animals that he always seemed to lure in, shoot, reel up, or just plain kill. He found himself in love with the warmer regions of Key West and, especially the lower Caribbean, such as Cuba.  The funny thing about Hemingway is that he did mostly all of his writing from his bedroom. Considering he spent over half of his time fishing off of boats, that is one heck of a feat if you ask me! The other weird tick he carried into his writing was his incessant need to be standing at all times. Maybe that is why from pictures I can see his massive calve muscles!

In 1938, he established a world record by catching seven marlin in one day. He was also the first person to ever boat a giant tuna in an undamaged state.

Hemingway was a bit of a cavalier angler and his catch needed respect. During a normal fishing trip to the Bahamas in 1935, he immediately opened fire on a group of sharks with a Thompson submachine-gun like Al Capone to stop them scavenging the insanely huge tuna he was trying to pull in. Unfortunately, as with more blood comes more sharks, so the explosion of blood simply caused them to attack his catch with even greater tenacity and soon his tuna was eaten whole. 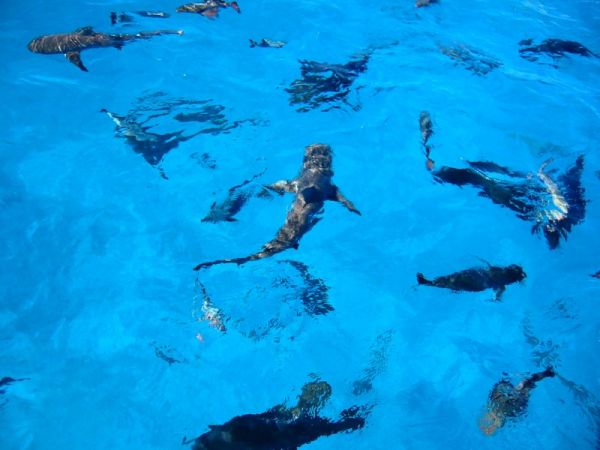 From Mark Twain, or Samuel L. Clemens, we know of such stories as The Adventures of Huckleberry Finn and the story (Roughing It) he wrote while participating in the Civil War, as a Missouri man and somewhat peculiar soldier. He was best buds with my great, great, great grandfather, Captain Absalom Grimes of Missouri. I believe they met while running steamships back and forth on the Mississippi. Absalom’s dad and uncle were captains, so I believe while he was working on the boats he formed a bond with my 3XG grandfather. However, Twain was only a steamboat pilot for two years. His career was cut short by the Civil War in 1861. Most people do not realize he penned his own name. Mark Twain was a pen name he picked up while writing for the Virginia City newspaper, which he first wrote under in 1863.He also wrote under Thomas Jefferson Snodgrass, W. Epaminondas Adrastus Blab, Sergeant Fathom, and Rambler during his career. Halley’s Comet transverses the Earth’s skies every 75 years. Mark Twain just so happened to be born following Halley’s comet, and in 1909 he predicted that he would die right along with Halley’s comet the next year. Just as Mark Twain predicted, he passed the night after the comet lit up the sky at the age of 75. It was the second death he predicted, the first being his brother’s.

“Twenty years from now, you will be more disappointed by the things that you didn’t do than by the ones you did do. So throw off the bowlines. Sail away from the safe harbor. Catch the trade winds in your sails. Explore. Dream. Discover.”

This time of year – when I think about fishing I think about one fish in particular. The elusive, strange, human-toothed fish that is quite possible the hardest thing to catch in North Florida! The Sheepshead are biting like crazy off of Mayport right now if you can believe it. You’ll find plenty of decent keeper sheepshead at the Big Jetties, Little Jetties Park, and surrounding areas. Look for markers – especially navigation markers and docks which are known producers of plenty of biting action. A good way to tell a productive dock from a dead one is by checking, looking, and keeping an eye out overlooking the pilings at lower tides. If the pilings have little to no barnacle or oyster growth on them, keep looking till you find one that does. This is crucial for forming habitats that the fish flock to. Another thing to consider is water depth. Shallow docks with less than four feet of water will either hold juvenile sheepshead or none at all. This is an issue that many docks, especially in Mayport and Ft. Caroline areas, will have riprap on the bottom near or around them. Many home owners throw construction debris such as concrete blocks off their docks to create habitat for fishing. This isn’t necessarily for the rest of us- however, that doesn’t mean you can’t take advantage of it. After years of flounder fishing in the area, I’ve found a number of good riprap piles around docks. But with the good also comes the bad. Keep trying different spots if you don’t get any bites. This kind of debris is more common than you might think. Some docks also contain riprap for the purpose of preventing bottom errosion around the pilings. This is especially common around aids to navigation. Most AID’s will have rocks piled around the base of their pilings. Just because you only see two or often times, one piling, don’t rule it out. The spot may not look like much at the surface but the bottom could have several square yards of rocky structure surrounding it. Many of them do. There are a number of baits that will catch sheepshead. The most common is the fiddler crab. However, oysters, live shrimp, clams, and muscles will also catch sheepshead.

Thanks to Florida Sportsman for writing such amazing articles. Be sure to give them a read because they are at the top of the game when it comes to sports fishing in the Sunshine State.

When you find your brand, you amplify your reach. Why don't you broaden your reach by letting one of our experts come alongside you & your company and show you how to run and manage your website with little training and purpose-driven results, bringing you satisfaction and your company a return on the best investment you will ever make. If that doesn't sound like you, that's okay too. We are more than happy to be transparent and up-front with you about cost and both short and long term goals. We don’t want all of the clients in Jacksonville, we just want the best. Do you need help creating a modern, user-friendly website? Looking to upgrade an old website? Check out North Florida Design. We have a website for every budget. Not only that, but we are family-owned and operated and local. We pride ourselves on our ability to create lucrative websites and build a brand that your business can rely on for many years to come. View all posts by NORTH FLORIDA DESIGN

1 thought on “The Old Men and The Sea”

Get To The Next Level

Let’s face it, the best way to achieve success is through a thorough and targeted approach. The way we like to rise above the competition is to create a value proposition for your business first and then we build. That is why it is so important that your business has a modern website with a logo that represents what you have to offer. Let an expert help take care of your website, logo/copyright, SEO, PPC,  marketing, social media marketing and IP marketing, whisper marketing & more!

Call us today! We aren’t about pitches, we’re about getting the job done right.

North Florida Design is a website development, digital marketing, social media management and creative services company based out of downtown Jacksonville and Ponte Vedra Beach and we look forward to working everywhere else in-between.

Give us a call today to speak to a digital expert and ask as many questions as you’d like! We’re not like the other guys, even if you don’t go with us – don’t hesitate to call and ask us anything.